Ellia Bisker and Jeff Morris are Charming Disaster, an eclectic folk noir duo coming to the Pretty Penny in Hillsboro in September.  Vocalists, storytellers and songwriters, they have an affinity for the dark side of folk music according to Ellia.

“We are dark in what we’re interested in but we’re actually really friendly people!” she said. “And we’re also very interested in humor both in our song writing and in our performance on stage.”

And while the subject matter – love, death, and the afterlife – may seem a bit heavy, their clever lyrics and vocal inflections as well as the use of guitar and ukulele as primary instruments inject just the right amount of levity to offset any sense of gloom.

When Ellia and Jeff met, they discovered they had other things in common besides their love of murder ballads.  Both are from Brooklyn NY and both started out in much larger ensembles that included strings, bass, percussion and and horns.  Jeff led the band Kotorino and Ellia played with bands Sweet Soubrette and Funkrust Brass Band.  Fate stepped in one night when Ellia happened to hear Kotorino playing in her neighborhood bar.  She spoke with Jeff after the band’s set was over.

“I really liked Jeff’s songwriting,” she said. “I felt a sort of sense of kindred spirit and although I was not in the habit of proposing to people I had just met that we write songs together which is one of the most vulnerable and even intimate activities you can do with another person, I was like we should try writing a song together.”

Jeff saw Ellia’s band Sweet Soubrette a couple weeks later and it clicked that they were on the same wavelength as songwriters and performers.  They met the next day and that very night began writing their first songs as a duo.  Both feel that their experience working with a much larger ensemble has had a positive influence on their work as a duo.

“Because we came from using a large ensemble as our expression I think it informed a lot of how we decided to do what we do,” said Jeff. “And to make it as interesting as possible within the limitations of just two people and to accomplish as much as we can.   And I think it wouldn’t have been that way if we were more experienced in just doing singer-songwritery stuff.  The fact that we came from these large ensembles and then had to switch gears into just two people it really opened up a lot of opportunities creatively for us.” 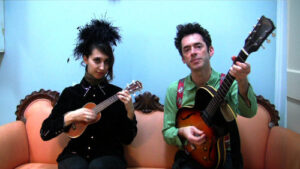 So how does a New York based folk noir duo wind up in Pocahontas County?  Credit for that goes to Erica Marks, Director of the Yew Mountain Center in Lobelia.  Erica’s daughter is a fan of Charming Disaster and asked about bringing them to the center.  The timing wasn’t right, so Erica put the duo in touch with Blair Campbell, owner of the Pretty Penny café, and a September date was added to the Charming Disaster fall tour.

Charming Disaster uses an unusual way of selecting song sets in their live performances – a musical tarot reading.  But don’t worry, there’s no fortune telling here and no attempt to decipher any meaning.  It’s simply used as a prop to involve the audience more directly in the performance.

“We associate one of our particular songs with a card and we have the audience draw a card,” he said.  “Whatever card they draw we put it up on the board and we do a spread.”

The spread determines which 10 songs out of their large repertoire they’ll play.

“It’s really exciting, it engages the audience,” said Ellia. “Suddenly if you’ve drawn a card you have “skin” in the game as it were, and it really engages people, everyone wants to draw a card after the first couple of people have drawn a card. It adds an element of chance which is very exciting for us”

“We don’t know what we’re going to get to play.  Each card is a surprise for us as well as the audience.”