Representatives of the National Institute for Occupational Safety and Health [NIOSH] and its parent organization, the Centers for Disease Control and Prevention were the hosts for an open house at the Linwood public library near Snowshoe on March 6th to answer questions about a proposed underground testing lab and research center near Mace on the Pocahontas-Randolph county line.   The proposed 460 acre site which borders US Route 219 is owned by the Consortium for Silver Creek Group.  The West Virginia Secretary of State’s office identifies David. L. Litsey, a Snowshoe area homeowner as the owner of the consortium. 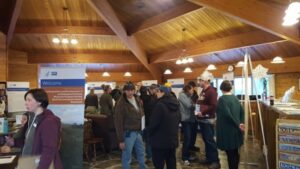 A cross section of people attended the 3 hour open house including local residents, business owners and county government officials.  The Mace site would replace the Lake Lynn Experimental Mine, an underground chamber in a limestone quarry located in Fairchance, Pennsylvania.  That site was operated by NIOSH from 1982 until 2012 when the property owner declined to sell or extend the lease on the property. A Draft Environmental Impact Statement on the Mace site was posted online in February.  Sam Tarr of the Office of Safety, Security and Asset Management for the CDC explained what they were looking for from the public meeting.

“The whole Environmental Impact Statement process is public involvement so we go out and do due diligence to understand what impacts it may have,” said Tarr.  “But it also gives the community, you guys live here daily, an opportunity to come and bring forward anything that maybe we’d overlooked; more importantly than overlooked that we’re just unaware of.”

Jeff Welsh, Associate Director of Science for the CDC/NIOSH said the Mace site would be used for research similar to that performed at the Lake Lynn site.

“What we did there is a lot of our explosion research and what that is, is looking at ways of preventing explosions from happening,” he said.

Many folks have questions about locating a facility in the Karst limestone that is so much a part of the Pocahontas county geology, but Welsh said it’s not really a factor.

“It doesn’t have an effect,” he said. “What we want to create is just like what an underground mine would look like so we can do experiments in full scale.

“I think it’s a project that fits Pocahontas County,” he said. “It’s a project that doesn’t have as far as I’m concerned any significant environmental issues and we’ll find out all those things, but no, I tend to be in favorite of it.”

Helmick said he’d also like to have more information about the potential economic impact the site could have on the county.

The project would potentially affect five federally listed species at the site through habitat loss or disruption including Northern Long-eared and Indiana Bats and the Cheat Mountain Salamander. NIOSH says that consultation with the US Fish and Wildlife service under section 7 of the Endangered Species Act is ongoing.

Autumn Crowe, Staff Scientist with West Virginia Rivers, says it’s difficult to form an opinion about the project because she said the DEIS is deficient.

“I really feel like they need more information in order to make the conclusion that there will be no impacts to ground water,” said Crowe.  “A lot of people are concerned about the well water and the springs; that’s their main source of drinking water.  We want to make sure their concerns are addressed for this project and right now I’m not seeing that those concerns can be alleviated because there’s not enough information to conclude that there’s no impacts to the ground water.”

Crowe said they are also concerned about discrepancies between the DEIS and the WV Division of Natural Resources regarding caves on the proposed site.  She said the WV DNR has commented that there are caves on the site, but the DEIS states there are no caves.  As for sinkholes, a feature that can be found in Karst, the DEIS states that no sinkholes were found during a survey of the site, but Crowe said only about 10 percent of the property was surveyed.  She said they would prefer to have a more detailed terrain survey done on the entire site to look for possible sinkholes.

Copies of the Draft EIS can be obtained at:

By written request (electronic copies only) to: cdc-macewv-eis@cdc.gov.