On Saturday, January 9th, about twenty people gathered at the former Howes Tannery Office Building in Frank, West Virginia. The Upper Pocahontas Community Cooperative, (or UPCC) and Pocahontas County Commission President Walt Helmick had arranged a walk-through of the now county-owned vacant building in an effort to reach a consensus in the community and among former workers about the current condition of the building and what should be done with the building in the future.

The UPCC has been considering the establishment of a museum memorializing the former Howes Tannery and the history of the leather industry of West Virginia, and had been looking at the possibility of using the former Howes Office Building as the museum, or at least the property as a place to build a museum. In an earlier walk-through of the building last November by several members of the UPCC and Commissioner Helmick, the extensive water damage to the rear portion of the building’s interior, raised serious doubts about the financial feasibility of renovating it as a museum.  It was suggested that the UPCC could possibly construct a smaller replica of the building elsewhere on the property for use as a museum, while the County commission demolishes the original building for safety reasons.

On January 9th, Helmick began by acknowledging that when the County Commission took ownership of the building in 1995, it was in good shape, but failed to fix the roof, causing the damaged building we now see there.

Some people asked if the building was fixed up, could it be used by the community for purposes other than a museum, such as making it a bed and breakfast or other private business or perhaps once again as a Sheriff’s substation once again. The cost of heating the uninsulated building was cited as one thing that could work against those ideas.

John Simmons, who used to work for the Tannery, was upset that the commission now is talking about tearing down the building.

“This is a part of history on how it was. And you got a perfectly good building here, but you got a little water damage. If you don’t maintain your house, you’re going to get water damage. And that’s what happened here. The County Commission didn’t do anything and now just want to tear it down. What it going to cost to tear this down and build a new building here. You can do a lot of work in here for what they are wanting to do.”

Others agreed, saying that this building is the only remaining part of the history of the tannery, and they were upset that people want to tear it down.

Other people said that maintaining the history of the tannery is a great idea emotionally, but you have to factor in not only the cost of the renovations, but also the costs of running and administering a business or a museum over the long term, as well as the cost of ongoing maintenance of the building. In other words, the need for a specific use will have to be great enough to financially support any future use of the building.

All-in-all, this walk through may have raised more questions than answers.

Below are a series of photographs of the building, including some of the seldom seen, but much talked about flooded basement: 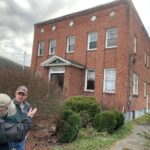 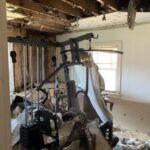 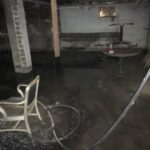 Another View of Basement 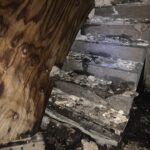 Looking up the basement stairs 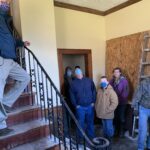 Tim is the WVMR News Reporter. Tim is a native of Maryland who started coming to Pocahontas County in the 1970’s as a caver. He bought land on Droop Mountain off Jacox Road in 1976 and built a small house there in the early 80’s. While still working in Maryland, Tim spent much time at his place which is located on the Friars Hole Cave Preserve. Retiring in 2011 as a Lieutenant with the Anne Arundel County Police Department in Maryland, Tim finally took the plunge and moved from Maryland to his real home on Droop Mountain. He began working as the Pocahontas County Reporter for Allegheny Mountain Radio in January of 2015.
FIND US ON FACEBOOK