Sage Tanguay: Last month, the Yew Mountain Center hosted their Forest Farming Field Day. On the breezy Saturday, I spoke with some of the organizers and presenters. If you’re wondering what forest farming is, it’s just what it sounds like: Instead of typical garden plants, you cultivate wild and native species like black cohosh,  goldenseal, ginseng, bloodroot, ramps, and mushrooms. 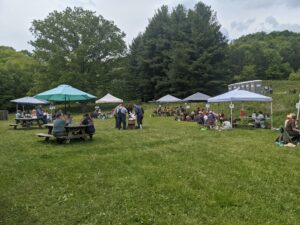 Here’s Will Lewis, the Forest Farming Coordinator of the Yew Mountain Center. In the background, you will hear Blaine Sprouse on the fiddle.

Will Lewis: So a lot of these botanicals do require pretty specific environments to be produced. One of our workshops today is ‘Site Assessment’ – so how to assess the site for these forest botanicals. But basically you would be growing these things in the understory like you would out in the field except you’re growing them in the forest.

There are some differences, it’s a little more specific than a potato plant, you know, especially when you get in regards to like ginseng… goldenseal’s a little more lenient about it’s habitat but there’s kind of several characteristics that you’re gonna be looking for as to how all and where you want to plant those, where they’ll actually grow. And that’s a big part of what we do here the Yew Mountain Center – Teach people.

Sage Tanguay: He explained that in the past 15 years demand for forest botanicals has skyrocketed leading to an increased pressure on the wild population of these precious plants.

Will Lewis: And because of people either not understanding the longevity of the life cycles, the biology of these plants, or looking for that quick buck or just not really understanding what they’re doing and going through the woods –  there’s been a lot of overharvesting where these plants have kind of been wiped out and people have taken too much and the populations are dwindling and dwindling in the wild population.

Sage Tanguay: These botanicals are important ingredients in herbal medicines and products. My next guest was a presenter who specializes in creating such products.

Ruby Daniels: My name is Ruby Daniels and my company is called Creasy Jane. I have a website:  CREASYJANE.com

I talk about my experience; I show products that I made because I make herbal soaps, I make herbal teass and you know, just explain that to people and kind of encourage them that you can do it too and then I suggest books that I’ve used that I feel are helpful.

Sage Tanguay: I asked her how she initially became interested in herbalism.

Ruby Daniels: My grandmother. I’m from Maryland when I would visit West Virginia in the summers, she got me into herbs. And then I became a massage therapist and I started making my own products that I would massage people with.

Sage Tanguay: Taking it to the next level, she eventually got her masters in therapeutic herbalism from the Maryland University of Integrative Health. What do you think of the event today?

Ruby Daniels: I think it’s awesome! I’m part of the West Virginia Forest Farming Initiative and Yew Mountain is always my favorite place to come and just seeing everybody that I’ve been working with for the last year to boost up the forest farming industry in West Virginia. Because this is a perfect place to do it – look at these beautiful mountains, like it’s… this is great – and it’s like our first event since COVID-19 because we’ve been zooming all year,  y’all! So being in person with people is better than anything else.

Sage Tanguay: Ruby says two of her favorite plants to work with are lemon balm and skull cap because they can help address anxiety stress and the nervous system. Here is Will again with his favorites

Will Lewis: That’s a good question… I would say it’s a probably a tie between Golden Seal and Ramp. You know ramp may not be a botanical but it does have a medicinal value,  just a great edible crop and a goldenseal – just something really special about that plant. I don’t know, the goldenness of the root and I just really enjoy working with it and that’s kind of one of the ones we’ve been focusing on here at the Yew Mountain Center too because there’s a such a high market demand that’s been growing. Like I said, it quadrupled during COVID. A big thing we’re trying to do is produce planting stock for forest farmers because there’s been identified major gaps – if 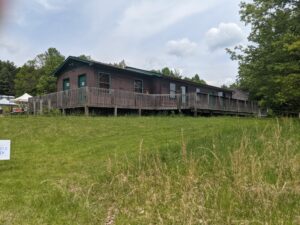 someone that wants to start farming goldenseal and want to plant say, you know several hundred plants, there’s not a whole lot of sources to find those plants especially at an affordable rate where they can make money on it. So big thing we’re trying to do here is kind of bulk production of goldenseal to sell as planting stock – and we’re also looking for other people that want to do that too on their farms so you know anyone’s interested please reach out they can reach out to the Yew Mountain Center or they look up look us up online the West Virginia Forest Farming Initiative. There’ll be some contact information on all those sites.