Dr. James “Jim” Jackson began his term as the new Director of the Green Bank Observatory in October.  But while he is new to the area, he was already very familiar with the GBO.

“I’ve been a customer of Green Bank and I’ve been on the other side of things and I’ve used the telescope [GBT] for my research and it was fantastic,” said Dr. Jackson.

“I’ve come here a few times and really liked the place, really liked the staff; so competent and so dedicated to their work and their craft.  As you rise up through the ranks of astronomy you can start getting into the admin thing and I found that I really enjoyed observatory management.  So I was casting around for Director jobs and this one came up, so this is perfect because I know the people, I know the science, I know the facility, [and] like the area.  It was a confluence of all these wonderful things coming together, perfect!” 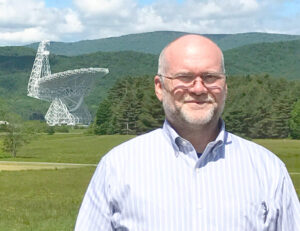 He was drawn to the study of astrophysics from a young age.

“I’ve always wanted to be an astronomer, ever since I was a little boy. I couldn’t get enough books about space and rockets, what’s happening in the sky with stars and planets.”

“I didn’t know what being an astronomer was to be honest.  So, I majored in astronomy when I went to university and I had no idea that it involved things like grant funding and writing papers and lots of math and lots of physics.  But it was absolutely fascinating and I feel so lucky that I get to do my passion and get paid for it.”

Jackson said while he admires astronauts, he was never really interested in pursuing that path; he was far more interested in the beauty of the universe that he saw in a telescope.  His career has taken him around the world, mostly in the world of academia.  At Boston University he served as an astronomy professor, Dept Chair and Dean.  Following a period of research in Australia, he took a sabbatical there and met his future wife. They eventually returned to the US and settled in the Silicon Valley.  While there he had the opportunity to work with SOFIA or Stratospheric Observatory for Infrared Astronomy.  It’s literally a telescope on an airplane – how cool is that.

He’s used telescopes on 6 of the 7 continents, all except Africa.  He talks about what he’s learned working with such diverse groups.

At one time in the not too distant past, there was a serious worry that the GBO might not continue to be a place where those amazing discoveries could be made. It was fighting for its very existence under the threat of losing funding from the National Science Foundation.

“The GBO has weathered some funding storms, and I think funding is still an issue, but not THE issue anymore,” said Dr. Jackson. “Securing the funding is one thing, but I think really the big challenge here is where are we going to go; we need to decide on our direction. And there are a lot of opportunities out there, there’s lots of different things we could do.  I think we need to engage both the local community and the astronomy community and just chart a course together.  And once we have our goals clear, then we can craft the plan that gets up there.”

In part two of this story, we’ll hear about Dr. Jackson’s hopes for the GBO and some cool new projects they hope to pursue.