Green Bank students talk to an astronaut on the ISS

05-11-21 GBEMS Calls the ISSOn Friday, May 7th, students at Green Bank Elementary Middle school in West Virginia had a chance to make a call that was out of this world.

“November Eight Romeo Victor, this is November Alpha One Sierra, Sierra, I have you loud and clear.” 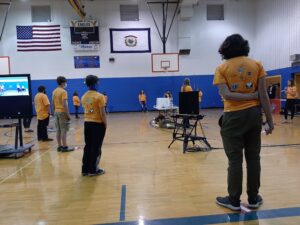 The students had about 7 and a half minutes to speak with Vande Hei before the ISS, moving at over 15,000 miles per hour, was out of range.  They wanted to know about living conditions on the station, what Vande Hei does to relax, how he gets along with fellow astronauts and what happens if there is an emergency on the ISS.  Green Bank science teacher Anne Smith says the students spent a lot time perfecting their questions.

“We had several lessons on space and the space station, just to get them familiar with that.  And then I had all of the classes brainstorm questions; they just shouted out questions and I wrote them all down.”

With some help from the education dept at the Green Bank Observatory, Smith said they winnowed them down to a list of 15, all of which they were able to ask during the contact. 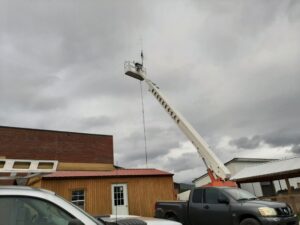 The event itself was also a group effort with support from GBO staff, the Amateur Radio on the International Space Station [ARISS] program and NASA.  Additional support also came from the Snowshoe Foundation, the Durbin Lions Club and the Eight Rivers Amateur Radio Club.

Marty Bloss, Program Manager at the GBO, was just happy they were able to pull it off. They were supposed to make contact in 2020…then COVID happened.

“So what was supposed to happen in a few months ended up taking almost a year and a half.  But today, everyone was here, they were healthy and we got to do the contact.  We’re really happy that the students got to participate in this and talk to the space station today.”