Joy to Lewisburg brings Mountain Stage talent to the WVSOM

Thompson said the event began a few years ago when Lewisburg attorney William DePaulo approached him about doing a holiday concert in Lewisburg.  DePaulo lived in Charleston before relocating to Lewisburg, and had been a fan of Thompson’s Joy the the World concerts, which have been a Charleston area holiday tradition for over 25 years. 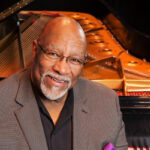 The Joy to Lewisburg concert began as a small club event, then moved to the Greenbrier Valley Theatre as the event drew more people.  This year it will be at the WVSOM Student Center on Lee St. Thompson is happy that the event has grown in popularity over the years.

“It’s just a nice event and people seem to like it and they come out,” he said. “It’s all Christmas music and we do our arrangements of most of the classics and some unfamiliar Christmas tunes.  We always try to find something new that maybe people are not as familiar with just to introduce some new material.”

As in past years, Landau Eugene Murphy Jr will join Thompson at the concert.  He’s the soul and Sinatra-singing season six winner of America’s Got Talent.  It’s likely he’ll be sharing music from his holiday album Christmas Made for Two which raised thousands of dollars for the Children’s Home Society of West Virginia.  Also, on the program is Larry Groce.

“Bob asked me to join and I was extremely happy to join because I’ve worked with Bob for many, many years and I’ve been to many of his Joy to the World concerts and enjoyed them all and he’s a wonderful performer,” said Groce. “This is just a rare opportunity for me, I jumped at the chance.”

Many folks recognize that voice as the voice of Mountain Stage, a public radio program that just celebrated it’s 36th anniversary.  But Groce has had a long musical recording career of his own.

“That’s what I was for the first 15 years of my career was basically writing songs and singing, and traveling around and recording,” he said. “And I made some albums of my own of original material.  I also made some albums of hymns. And then I made a bunch of albums for Walt Disney records too. I actually have made two Christmas albums for Disney.”

After he became the host and Artistic Director for Mountain Stage, his singing and song writing was phased out a bit.  But he recently got back into song writing when he wrote songs for a musical stage adaption of Danial Boyd’s movie Paradise Park.   He says his contribution to the Joy to Lewisburg concert will feature some traditional tunes.

“With the Christmas show there’ll be some traditional hymns; as a matter of fact I’m going to do the traditional Appalachian hymn, The Cherry Tree.  And I’m also going to do Good King Wenceslaus with the lap dulcimer.”

Groce is also excited to have his daughter playing along him for this show.

“I have a chance to play with my daughter who’s seventeen,” he said.  “We’ve never played together before, she plays the viola.  She was able to join me on these concerts.”

In addition to the Joy to Lewisburg concert, Groce and Murphy will also perform six other holiday concerts in Bluefield, Fayetteville, Gilbert, Ironton, Morgantown and Madison.

Joy to Lewisburg is Sunday, December 15th at 6pm at the WVSOM Student Center.  Tickets are $20.00 online and $25.00 at the door. If you bring a non-perishable item for the local food bank, you can receive a free Landau Murphy cd.