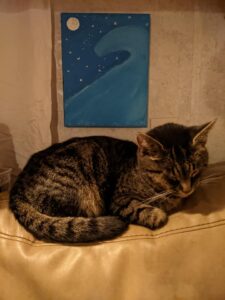 Leona, a gray tabby cat, had quite an adventure in Highland County.  On September 27th, she was traveling through with her family on the way home to northeastern Indiana when she escaped from their truck.   It was about six weeks before her family got a call and heard from her again.  Heather Cooper is a member of Leona’s family.

While driving through Highland County, one of Cooper’s children got carsick.

“So then this emergency happened and I pull over very quickly,” says Cooper. “I hop out of the truck.   I run off behind me to open the door and, not thinking about we have our cat loose in our truck, I just left the doors wide open. This was the first time that we had had Leona up in our truck with us. We usually just left her in the camper and we thought it might be nicer for her if we bring her up in the truck with us.  She was meowing in her crate and I was like ‘Oh let’s just let her out’.”

The family then had lunch there on the side of the road hoping Leona would come back.  They spotted her and tried to catch her a couple of times.

“I saw her again and I was like ‘Great, she’s over closer to the camper and I was like maybe she’ll go there’ and so I started walking closer and she didn’t,” says Cooper.  “She ran to the wilderness.”

Cooper gave up and spoke with a nearby resident.

“I didn’t think to get their phone number or their names,” says Cooper.  “I was just like ‘Hey here’s what’s going on.  We’re passing through.  Here’s my phone number. Here’s my name. She’s a really sweet cat.  She hates to travel apparently’.”

As time went on, Leona was spotted in the area by different people who didn’t know her story.  Despite putting food out for her when she came around, no one could get close.  People posted about her on Facebook trying to find her owner.  Leona visited Terri Hevener’s yard.  She’s a volunteer with the Highland County Humane Society.  Hevener and a neighbor, about a mile away, both set traps, but didn’t get Leona.  But on November 6th, Hevener got a call from another neighbor.

“She said we have this kitty that showed up on our back porch and they had their young grandchildren visiting and seems pretty friendly and it has a collar on it, but we don’t recognize it as belonging to anybody,” says Hevener.  “So I went down and at that point she just opened the door and it went into her house.  And I think it was so happy to hear a family and children’s voices that it was drawn to go up on her porch.”

Corena Huffman is the President of the Highland County Humane Society.

“We checked her for a microchip and she had one which was quite a surprise,” says Huffman.  “I’ve never had a microchip scan for a cat here in Highland.  Something new for us and pretty exciting to find out that she had a chip and an owner, because we were pretty sure someone was missing their cat.  She looked well loved, she was socialized, she was friendly, she had her little collar on.  We were just glad to be a part of getting her back to her family.”

“If your pet is important to you it’s important to microchip and keep the subscription active,” says Cooper.   “I’m super grateful for everybody that was involved with feeding her when she was out in the wild and her ultimate capture and everybody involved with hosting her at their house and loving on her and making sure that she was well and updating her vaccines and all those things.  I really appreciate the team effort that it was to bring her back home.”

Leona was reunited with her family on November 12th.  A volunteer drove Leona as far as Dayton, Ohio and her family drove three hours to meet her there.

Bonnie Ralston is the Assistant Station Coordinator at WVLS and a Highland County news reporter. She began volunteering at Allegheny Mountain Radio in the fall of 2005. In 2006 she became an AMR employee and worked in Bath County for eight years as the WCHG Station Coordinator and then as the news reporter there. She began working in radio while in college and has stayed connected to radio, in one way or another, for more than thirty years. She grew up in Staunton, Virginia, while spending a lot of time on her family’s farm in Deerfield, Virginia. She enjoys spending time outside, watching old TV shows and movies and tending to her chickens.
FIND US ON FACEBOOK