It all started a few years ago as jam sessions in the back of the JustAJar Print Shop in Marietta, Ohio.  But from those humble beginnings, OYO has grown into a rollicking, rootsy band of six talented musicians.  And they’re ready for their next monumental step – the release of their first album on Feb 8th.  But before that, you can get a little taste of the new album online this weekend – more about in a bit.

Cole Adair, one of the founding members explains how things got started.

“Joe and I played together 10 years ago.  We just grew cooler and cooler as people joined us, our sound of two to make a sound of six.  We just kept showing up for a jam every First Friday or whenever it was, and the next thing you know, we had to come up with names.”

One of their first gigs was for the rotary club for a free lobster dinner, so naturally they became the Free Lobster Boys.  Later on it was the Muskey Buckets.  They eventually settled on the name OYO, an Iroquois term meaning great river and widely accepted as the source for the name of the Ohio River that snakes its way along the Ohio-WV border.

OYO is Cole Adair on guitar, Aaron Martin on fiddle and mandolin, Michael Bond on guitar, keys, harmonica and spoons, Bobby Rosenstock on banjo, Joe Ryckebosch on drums and washboard, and Drew Tanner on bass. 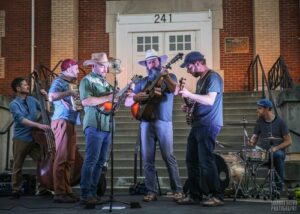 OYO at the Marietta Armory in June 2021 courtesy OYO

Folks in Pocahontas will certainly recognize that last name.  Drew Tanner was a fixture in the county for many years, working for both AMR and the Pocahontas Times as well as many other endeavors.  He joined OYO about 4 years ago after moving to Ohio.

“I was the last one to join about 4 years ago and these guys were already starting to coalesce when Bobby came to him and said they needed a bass player.  I said well I don’t play bass, but I’ve played guitar and I used to sing bass a lot, so I know how bass lines are constructed.  These guys are very patient in terms of welcoming myself and I’m sure a lot of musicians into the fold.”

Michael Bond says they prefer to let others define their sound that has influences of indie rock, old time and folk.

“We’re all coming from different angles on this thing, but I think there’s a shared love of roots music, especially a certain place between outlaw country and 60’s roots like The Band or The Byrds.  If you call us Americana or Appalachian or whatever else, I think we’ll be happy with it.”

One factor contributing to their singular sound is that everyone is singing around a single microphone.  Adair says that’s by design.

“I think that’s the sound we’re kind of going for; it’s a little bit more involved, a little bit more engaged.  We play mostly standing around in a circle, not necessarily performing on a stage, but just trying to listen to everyone’s instruments and fit in where there’s space, trying to complement somebody, so it seemed like a natural fit.”

Tanner says it allows a more natural flow of the performers as they take turns on vocal or instrumental leads and cuts down on the amount of equipment they have to transport.

With the upcoming release of their first album, the band is also looking forward to performing in other venues like those along the Mountain Music Trail including the Pocahontas Opera House and the Purple Fiddle in Davis.  For now, Tanner says you can get a taste of OYO by tuning in for a special release party this weekend.

“Our friends at WOUB up in Athens, Ohio, they are actually doing a premiere of the album, so you’ll be able to catch it on WOUB.org starting February 4th over that weekend.  And then the full release happens Tuesday [the 8th] and will be available across all streaming platforms and our website oyotheband.com.”