Pine Mountain, in eastern Kentucky not too far from Harlan, is something usual for the state – a biologically diverse area with a sandstone heart that’s never been mined for coal.  Because of its relatively untouched state, not only has the environment thrived, it’s also been the source of a rich vein of Appalachian culture and music.  The story of that history and music will be told at the Pocahontas Opera House on Saturday, November 9th as part of the Pine Mountain Sessions.

The Pine Mountain Sessions is also the title of a double LP recorded at a nearly century-old chapel on the slopes of Pine Mountain.  Daniel Martin Moore, the singer-songwriter behind the project gives us a little more background.

“Pine Mountain Sessions is a compilation record of a lot of different Kentucky artists,” said Daniel. “Quite a few musicians but also some poets and novelists.  Really the whole thing came together as a way to celebrate the work of the Kentucky Natural Lands Trust and Pine Mountain Settlement School.”

The Kentucky Natural Lands Trust is a state-wide trust established in 1995 committed to preserving natural spaces across the state.  Daniel said the groups efforts include the Pine Mountain Wildlands Corridor.

“Pine Mountain has the largest tracts of old growth forests left in the state of Kentucky,” he said. “It’s a mountain made of sandstone so it’s never been detonated for coal, so almost the entire ridge line is still intact. It’s a crucial migratory route for all kinds of animals that can’t make it all the way across, say, Black Mountain because of all the strip mining and the destruction over there.”

Daniel says it’s a unique and incredibly biologically diverse area with many species that are found only on Pine Mountain. 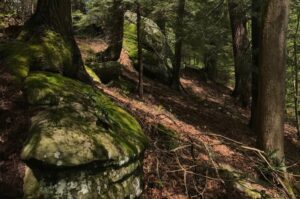 Equally unique is the Pine Mountain Settlement School, founded in 1913 as a school for children living in the remote southeastern mountains of the state. Built on land donated by William Creech, Sr. Daniel says Creech saw a need for a place where students could not only learn arithmetic, but also about the culture, heritage and history of the area. The school is a National Historic Landmark.

“I think the spirit of it is what makes it so special,” said Daniel, “now it mostly focuses on environmental education.  The setting is gorgeous, the architecture is incredible and there’s a beautiful stone chapel there on the side of the mountain that happens to have lovely acoustics and that’s where we recorded the album.”

Daniel says he contacted about 15 to 20 performers for the Pine Sessions album, thinking he’d hear from 10 or 12.  But everyone said yes and the roster of artists grew from there.  In fact, it became apparent rather quickly that this was going to become a double album. Borrowing an idea from Lands Trust artist Zoe Strecker, he decided to divide the album into seasons.

“It just sort of clicked into place that those would be the perfect way to divide up the album; to think of it conceptually as a year passing as the seasons change,” he said.

The album features artists born and bred in Kentucky like Heather Summers, who is half of the duo The Other Years.  She’ll be appearing at the Opera House along with Daniel.

“Heather has one of the most extraordinary voices that I have ever heard and she writes incredible songs, powerful, powerful songs but also knows a lot of the old songs,” said Daniel.

You can hear Daniel and Heather at the Pocahontas Opera House in Marlinton on Saturday, November 9th at 7:30pm.  Tickets are $10.00 and are available at the door and at the 4th Avenue Gallery in Marlinton.