While the current county seat of Pocahontas is Marlinton, that’s not where the county was born 200 years ago, according to Tim Wade, Huntersville Historical Traditions President.

On an unusually warm December day, members of Huntersville Traditions, the Pocahontas County Bicentennial committee, descendants of the original families of Pocahontas and distinguished dignitaries all gathered to celebrate the kickoff of a year of celebration of the 200th anniversary of the founding of Pocahontas County.

Bob Sheets, a retired Pocahontas County history teacher and part-time archeologist, gave some historic background about the founding of the county. Well before the first European settlers arrived, he said there was a large population of Native Americans. In fact, through his archeological work, he’s found evidence of civilizations going back 10 to 12 thousand years.

“Now when Europeans showed up, they were not in conflict with these folks, they were in a trading economy with them.  The Native Americans had things that they wanted, specifically, early on, beaver pelts.  If you could get in here and get out with those beaver hides,you’re your own, then you became a rich man when you got back to Staunton.”

The first wave of European settlers arrived in the county in the 1740’s and 50’s, only to be driven back to the Shenandoah Valley by the French and Indian War.

“The second wave began after the French and Indian War ended in 1756.  Land was beging granted free of charge to people to settle this particular area because settlement meant taxes, and that was good for the economy of Virginia. So this area flourished because of the geography, the waters, the land, all of those things made things happen here.  And one of the individuals that was here was a guy named John Bradshaw.  Bradshaw had established his home and a trading post and business grew up around that.”

Following his service in the Revolutionary War, Bradshaw won the Virginia Road Lottery with a prize of $10,000.00, the equivalent of about a quarter of a million today. With that windfall, as well as ownership of square miles of land, Bradshaw was able to push for Huntersville as the seat of the newly formed Pocahontas County, even though the center of population at that time was at Edray.  Sheets said Bradshaw and his family flourished in their new home.

“His wife and he had moved here from the Bullpasture River, about 10 miles below McDowell.  His land encompassed the farmland around [Huntersville].  The home sat on a bluff looking down on the beautiful water of Knapps Creek.”

Much of the town was burned during the Civil War. It was rebuilt following the war, and is now part of West Virginia, rather than Virginia. 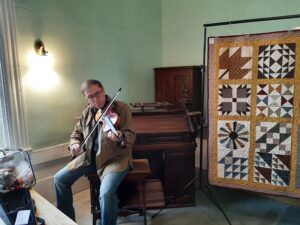 As part of the celebration, two quilts made by a group of county quilters were presented.  Pocahontas Parks and Recreation Director Lauren Bennett said the quilts were made using cloth that replicated Civil War era patterns. 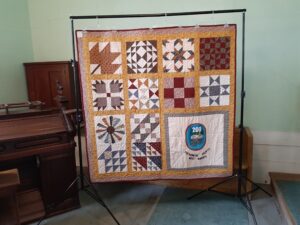 One of two quilts created by Pocahontas County quilters – this one includes the official seal of the Bicentennial.

“We though it would be nice to have a lasting memory of the Bicentennial and we have a lot of very fine quilters in this county.  Over 30 participated in this project.”

The quilts will travel around the county at various festivals over the next year. Bennett says she hopes to eventually see them on permanent display at the courthouse. 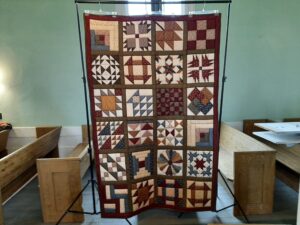 Cara Rose, Executive Director of the Pocahontas County Convention and Visitors Bureau was also recognized as the driving force behind the Bicentennial celebration.

Rose also thanked the Huntersville Historical Society for the refreshments and Jake Hyre for the music during the gathering and during the presentations.  You can find more information about the Bicentennial at celebratepocahontas200.com.