On Saturday December 21st the Highland County Arts Council will welcome two young Americans who’ve made a name for themselves in European classical music performance. They also have a very strong tie to one particular Highland County resident. Violinist Rachelle Hunt and Cellist Katie Tertell will perform several classical pieces for violin and cello at the Highland Center Saturday night at 7pm.

They met and began playing their instruments in the eighth grade while students in Fairfax County schools.  When they went moved to McClean High School, they met Gretta Sandberg, then the orchestra teacher and now, retired and a resident of Highland County and Secretary for the Highland County Arts Council.  Both Rachelle and Katie credit Gretta for inspiring their desire to perform in Europe as Rachelle explains.

“The first time both of I believe ever went to Europe was actually through an exchange program she really nurtured at McClean high school,” said Rachelle. “They had an exchange program with a high school in Detmold Germany which is a small town in the state of North Rhine-Wesphalia kind of near cities like Hanover or Dusseldorf.”

“I went there twice and Katie went there once in high school and we had a cultural and musical exchange.  That kind of opened our eyes to how music really is a global language that can really bring people closer and that really imprinted upon us.”

Both attended college in the US before moving abroad.  Rachelle graduated from Rice University in Texas and even while attending college, she traveled during school breaks to play with international orchestras.  Following her graduation from Rice, she received a Fulbright Scholarship to study in Germany and loved the country so much that she secured another scholarship to stay in Germany until she found a permanent position.   She is currently a member of the Frankfort Radio Symphony, one of the top orchestras in Europe.

Katie attended Indiana University for her undergraduate degree, then received a Masters degree from the Cleveland Institute of Music.  Until recently, Katie was a member of the National Symphony Orchestra of Ireland or RTE based in Dublin.  She is now working as a freelance musician with an Artists Visa that allows her to work with several different orchestral and chamber music groups in England and Scotland.  Similar to Rachelle, Katie says that first trip to Europe at 16 inspired her desire to play abroad.

“For artists and musicians, it’s often an important thing to be outside of your comfort zone in some ways and to experience a different way of life,” said Katie. “I really wanted to experience living in another culture, so I lived in Manchester England for about three and a half years before I got my job in Ireland.” 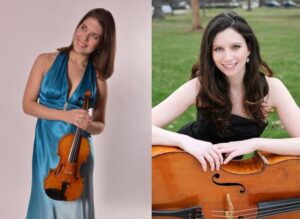 Once in Europe, both found that living abroad seemed to suit them well. Both say they feel very lucky that music has enabled them to travel the world and still remain close to family and friends in Virginia.  But after living in Europe for a number of years, coming home can be a bit of a culture shock says Katie.

“I’ll tell you what you notice, whenever you in..I was about to say que, but I realize that’s a very British word, whenever you’re in line waiting to go through customs I always notice Gosh, all these people sound so American!” she said.

For Rachelle, who has lived abroad for almost 12 years, sometimes even English can be a challenge.

“My daily life is in German, I speak German fluently; sometimes if I have gone days without speaking English I come back to the US and people think, you’re not from here, you have a slight accent,” said Rachelle.

“Sometimes I forget words and then it’s just a shock to hear when I come home that people say you’re not from here,” said Rachelle.

All About the Music

Fortunately, the music easily surmounts all other considerations when connecting both young women no matter where they are.  Their program at the Highland Center Saturday will include works by Beethoven, Mozart, Bartok and Martinu.  They’ll also perform the world premiere of a new work by British composer Mark Boden.  Katie says the piece called ‘Smaller Than the Trees’ was written with her and Rachelle in mind.

“It’s a luscious kind of slightly romantic work even though it’s a modern pc of music; very lyrical, quite slow and reflective,” she said.

Rachell says they’ll finish the program with a work that will allow them to show off their virtuosity on their instruments.

“And then our final piece will be a piece by Johan Halvorsen who was a Norwegian violinist and he wrote kind of a fantasy on a theme by Handel,” she said.  “And it’s become one of the most famous works for violin and cello.”

In addition to the concert Saturday night at the Highland Center, Rachelle and Katie will also hold a master class Saturday afternoon at 3pm with Highland County stringed instrument students. Members of the public are welcome to attend as well.  The concert is at 7pm.