The Search for the Yeti is ON!

“The whole point is to encourage people to get out and recreate even when it’s cold. I’d had this plan for a while, and then my boss Lauren Bennett brought me this paper and I was like hey it would be cool to do this monster hunt so we were both thinking the same idea.”

Even though Pocahontas has one of the top winter resorts on the east coast, there are many who prefer to hibernate rather than brave the cold.  The Yeti’s are at different locations throughout the county.  You can work as a team or solo to locate all 15.

“If they find all 15 and take their picture with them, they send in the pictures to us and then they come here to win a prize.”

Are they in buildings or are they outside? What kind of locations should people be looking for?

“So, both; we do only have 3 that are inside, most of them are going to be outside.  And people should think recreation places that we would go to hike or stuff like that.  There are a couple of exceptions, but for the most part it’s keeping in mind getting out and recreating.” 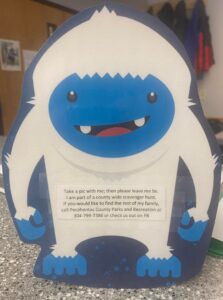 As with any good scavenger hunt, there are clues to help you find the Yetis.

“I have a list of clues; I’ve sent them out via email, I’ve also sent them through text message, through out Facebook page and I have a list here at the Marlinton Wellness Center. The first fifteen clues, they’re a little bit tricky, so you’re really going to have to use your brain to come up with the spots.”

The hunt began on February 14th and concludes on March 14th.  Roberts says as they get closer to the deadline, if folks are still having trouble locating the spots, she’ll release a second set of clues.

They also plan to do another scavenger hunt this summer incorporating spots that aren’t as accessible in the winter months. She’s hopes that folks will take advantage of this hunt to get out and enjoy the outdoors.

“I’m really excited because I’ve actually had a lot of people message me for clues.”