A very special convoy of trucks will depart from Columbia Falls, Maine on December 15th making its way to Arlington National Cemetery, in Virginia.  The trucks will each carry a load of handmade wreaths destined for the gravesites of fallen heroes at the cemetery.  JD Walker is one of the truck drivers who volunteer for this mission every year.

“I got involved in this project through Gully Transportation,” said Walker. “Terry Jones was the one that actually brought it to my attention and asked me if I wanted to be involved in it and I told him yes.  For the past four years I’ve been doing it and enjoy it; [it’s a] very humbling experience.”

Walker has a very personal connection to this effort, both because of his own military service and because he’s also part of a Gold Star family.

An event of this magnitude takes some planning.

“It takes probably a two and a half day trip to get out there from Quincy, Illinois due to the fact that I have pick up a load and carry it out to Pennsylvania or New Jersey to deliver and then leave from there to go straight up to Columbia Falls to be loaded with the wreaths.” 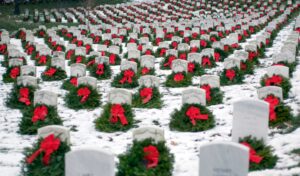 Walker will be transporting 4500 wreaths to Arlington National Cemetery.  He won’t be the only truck on the road, but because of the pandemic, the annual trip to deliver the wreaths will be different this year.

“There’s probably anywhere from 22 to 26 other trucks involved in this,” he said. “I’m the only truck that’s involved with the convoy this year. Usually we have 13 trucks, along with 12 wrapped Wreaths Across America SUVs, and nine state troopers to escort us down from Columbia Falls to all the way down to Arlington National Cemetery.”

“But this year, due to the pandemic they’re trying to do it as safely as possible. There’s set appointment times for each truck to go inside the cemetery to deliver the wreaths.”

The Wreaths Across America event usually draws tens of thousands of visitors to Arlington National Cemetery each December. A decision to cancel the event due to the ongoing pandemic was widely criticized and Secretary of the Army Ryan McCarthy ordered ANC leaders to reverse the decision.   Karen Worcester, CEO of Wreaths Across America said the decision was an amicable one and everyone involved agreed to hold a scaled back event this year.  The cemetery will be closed to the public December 13th through the 19th to allow the wreaths to be laid on the graves.

Family members of those buried at Arlington will be welcomed to lay wreaths at their loved one’s graves on December 13th.  From December 14th through the 18th, soldiers with the US Army Military District of Washington and the 3rd US Infantry will lay most of the wreaths.  Then on December 19th, a small group of Wreaths Across America Volunteers will lay wreaths in one section of the cemetery, an event that will be live-streamed.  Walker is scheduled to make his delivery of wreaths on the 19th.   He says there is still time to participate in this event.

“If you’re interested in sponsoring a wreath get in touch with wreathsacrossamerica.org.  They cost $15.00 a wreath; get out and support your Veterans.”

The Pocahontas County Veterans Honor Corps will conduct a Wreaths Across America ceremony at the Arbovale Cemetery on Saturday, December 19th at Noon.  Seven ceremonial wreaths will be placed in remembrance and to honor all those who have served in the Army, Navy, Air Force, Marines, Coast Guard, and Merchant Marine to honor their sacrifice and to teach younger generations about the high cost of our freedoms.

Thanks to Norris Long and Rick Wooddell with the Pocahontas County Veterans Honor Corps for some of the information in this story.